Some people think I jump on Chris Irons aka quoththeraven too much. Quite the opposite, not nearly enough. Why do I do this? Because he is on agenda, pretty much always wrong and if people follow his useless advice, they will get hurt.

Aside from being way off and totally wrong on Herbalife, GNC is another example of Chris Irons “wisdom” he has been very bullish on GNC for a very long time, probably because in his mind he sees it as a threat to Herbalife. Fat chance. Last January Irons proudly announced that he saw GNC as an easy jump to $14. GNC was trading at $10 at that time. Result? GNC sold off as we predicted it would.

But it has gotten much worse for GNC 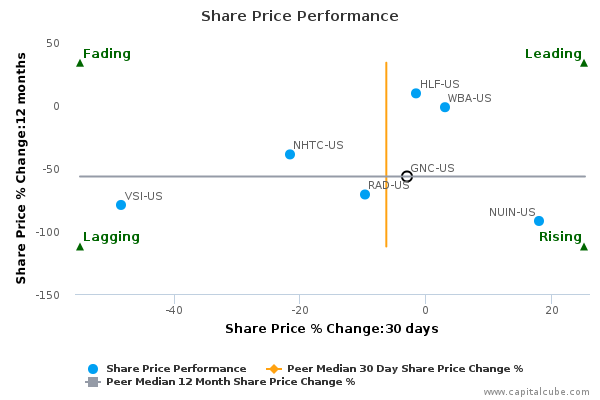 We predicted back in May after GNC reported dismal 1st qtr earnings in April that GNC would continue to decline and would miss 2nd qtr earnings as well. Here are GNCs 2nd qtr results.

GNC has been in a perpetual decline since 2013 with no turn around in sight.

And GNC is not alone.  Look at what happened to Vitamin Shoppe:

Shares of Vitamin Shoppe Inc. VSI, -0.45% plummeted 28% to a record low in morning trade Wednesday, after the vitamin and specialty supplements retailer reported second-quarter profit and revenue that missed expectations, and provided a downbeat outlook. The stock was on track for its second-biggest-ever one-day decline, behind the 33% plunge on May 10, 2017 in the wake of first-quarter results. The company said before Wednesday’s open that the second-quarter net loss was $156.4 million, or $6.73 a share, after a profit of $10.4 million, of 44 cents a share, in the same period a year ago. Excluding non-recurring items, such as $168.1 million in impairment charges, adjusted earnings per share of 23 cents missed the FactSet consensus of 39 cents. Revenue fell to $304.8 million from $332.7 million, missing the FactSet consensus of $314.7 million, as the same-store sales decline of 8.3% was more than expectations of a 6.1% decline. The company revised its 2017 same-store sales outlook to “negative mid-single digits” from the previous guidance of “negative low- to mid-single digits.” Chief Executive Colin Watts said results were disappointing as the market environment “evolved more quickly than we anticipated particularly in the sports categories.” The stock has tumbled 71% year to date, while the S&P 500 SPX, -0.29% has gained 10%.

The OTC nutritional companies are not doing that well and with my experience in taking supplements, I really wouldn’t recommend taking their products either. Apparently others are picking up on this which is no  doubt why their stocks are slipping.

Don’t listen to the pennystock “pump & dump” promoters who know next to nothing about the stock market, make insane predictions on dead stocks and attack good companies. They are masters of hype. Just listen to a few minutes of their “sales pitch” when they try to hustle you to buy their over priced junk penny stocks.  All hype no substance. Ditto for their stories on Seeking Alpha, blogs etc. Always hyping and always wrong.

Chris Irons/quoththeraven “Quoththeraven research” is just a one man operation and you can see how much quality is in his research (opinions)  He would be better off mowing lawns.

Be careful who you are listening to.

Here is the article I wrote several months ago.

It has been about 3 months since the April earnings report for GNC Holdings, Inc. GNC. Shares have lost about 22.8% in that time frame, underperforming the market.

Will the recent negative trend continue leading up to the stock’s next earnings release, or is it due for a breakout? Before we dive into how investors and analysts have reacted as of late, let’s take a quick look at the most recent earnings report in order to get a better handle on the important drivers.

The year-over-year decline was due to underperformance of the U.S. & Canada and manufacturing/wholesale segments.

Including one-time items, the company’s reported earnings were $0.35 per share, down 49.3% year over year.

Revenues during the reported quarter dropped 3.6% year over year to $644.8 million. The figure however outpaced the Zacks Consensus Estimate of $631.4 million.

The decline in revenue can be attributed to lower sales at the U.S. & Canada international and manufacturing/wholesale segments.

GNC Holdings reports its operations under three segments: U.S. & Canada – including company-owned stores in the U.S., Puerto Rico and Canada, franchise stores in the U.S. and e-commerce; International – including franchise locations in approximately 50 countries, The Health Store and China operations; and Manufacturing/Wholesale – comprising manufactured product sold to other segments, third-party contract manufacturing and sales to wholesale partners.

During the reported quarter, GNC Holdings’ revenues from the U.S. & Canada segment dropped 3.8% to $552.9 million, primarily because of a decline in same store sales in both company-owned and franchise stores. Domestic franchise revenues however rose 1.6% to $83.1 million, driven by a net increase in the number of franchise stores from 1,082 as of Mar 31, 2016, to 1,164 as on Mar 31, 2017. This was partially offset by the impact of negative retail same stores sales of 4.6% in the reported quarter. Weakness in the food and protein categories as well as significant decrease in e-commerce sales due to better aligning web promotions to the company’s stores, largely affected this segment in the fourth quarter.

Revenues at the international segment increased 7% to $39.4 million. Revenues from international franchisees increased $1.3 million primarily due to an increase in wholesale sales and in retail same store sales of 3.8% in the current quarter (excluding the impact of foreign exchange rate changes relative to the U.S. dollar). Revenues from the China business increased $1.2 million in the current quarter compared with the prior quarter.

However, it should be noted that there is a lot of chaos in China right now especially with nutrition based companies. No reason to believe that GNC will see this growth again in 2017-2018.

Revenues at the manufacturing/wholesale segment (excluding intersegment revenues) decreased 8.6% to $52.5 million. Within this segment, third-party contract manufacturing sales increased 0.9% to $30.7 million, which was partially offset by a 19.3% decline in wholesale sales to $21.8 million and a 2.7% drop in intersegment sales to $61.3 million, primarily due to lower proprietary sales in the U.S. & Canada segment.

Gross profit deteriorated 9.7% in the reported quarter to $212.9 million. Consequently, gross margin contracted 223 basis points (bps) to 33% owing to lower sales and product margins at the company’s GNC.com business and deleverage of occupancy costs as a result of negative same-store sales.

Selling, general and administrative expenses rose 12.2% to $160.5 million. However, adjusted operating margin deteriorated 231 bps to 32.3% owing to a wider decline in gross profit.

Earlier, management had announced plans to revamp its existing business model, dubbed as the ‘One New GNC”. The company has already started seeing transformational changes during the first quarter 2017. GNC Holdings recorded 9.3% growth in the reported quarter and its management is encouraged by the new loyalty programs under this plan. As of the end of the first quarter of 2017, 5 million consumers joined the myGNC Rewards Program.

However, it should be noted that the street reacted very negatively to these numbers.  The so called  “transformational changes during the first quarter 2017.” resulted in a 22% drop in GNC stock. If these changes were so remarkable, why are investors selling so massively???

How Have Estimates Been Moving Since Then?

Following the release, investors have witnessed a downward trend in fresh estimates. There has been one upward revision for the current quarter compared to three downward. In the past month, the consensus estimate has shifted upward by 7.1% due to these changes.

The estimates have been broadly trending downward for the stock (GNC), the magnitude of these revisions does not look promising. Gains will be negligible at best.

GNC has also had a host of complaints filed against them including issues of adding banned substances in their sports supplements. Brick & mortar franchise businesses seem to be in a decline. Thi9s has impacted GNC With GNC, even their online business has dropped.

Also, people want more personalized service. For this they will go to the private health food stores or the direct sales network marketing companies that provide more one on one service, counseling and support. Some companies even have nutrition clubs and meetings where customers can get together and network with their peers.

Many customers have noted no real difference or change in using GNC products. Who wants to pay so much for products that are just ho-hum????

GNC  tried to  capture the weight loss market. They have a shake which is chalky and a fat burner which could be dangerous.  Customers do not seem too elated over the results and are not breaking down the walls reordering or recommending these products.

Finally, there is the cost. Savvy, modern aware consumers now realize that they pay much more for products sold at places like GNC. They are paying for the leasing, employee payroll, advertising, franchise fees etc.  Prices are elevated by as much as 270%. This is not for   superior products, research & development, it is for basic expences of running a franchise business.

While some analysts have at best a neutral or hold position on GNC, we sincerely believe that is overly optimistic and way too bullish.

We do not recommend a buy or hold on GNC at this point.  See if changes really   do impact any progress or if GNC just continues to decline.

BEWARE of people hyping GNC. Last January, a very irresponsible an unreliable source here on twitter, was overly bullish on GNC and at that time suggesting that GNC would pop up from $10.50 to over $14 very quickly. We saw how that worked out. This same person had been hyping VRX as it dropped from $270 all the way down to $10. Caveat emptor!

On the other hand, we advised to sell. Look who was right.

GNC has been in steady decline for quite some time with no signs of turning around anytime soon.

While there was a lot of hype in April ahead of earnings, look how quickly GNC dropped right down again. Classic Pump & Dump.